This week went by fast. Its already Spring Break! Here’s our week . . .

Boys never tire of finding new places for their cars. 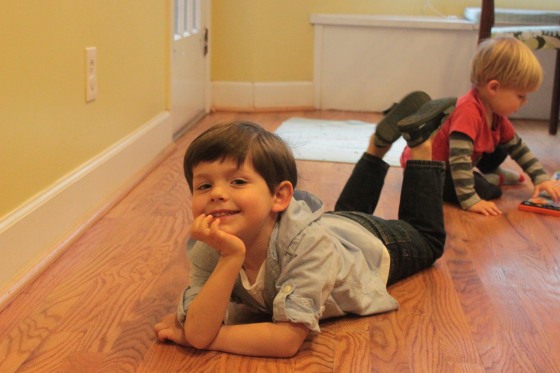 This is what Brooks’ wore for Spring Pictures at school. I convinced him to put on this shirt by promising him I would take pictures of him to show just how awesome he looks. He agreed. So when it came time to take his picture he started posing and wouldn’t stop.

He knows he looks awesome.

I thought this picture says so much about their relationship – Silas always has his eye on Brooks. Its hard to tell, but Brooks’ finger was headed straight for Silas’ eye.

So happy when our mornings start out with T.V.

A progression of Easter pictures. (We were sick last week, so we took some this week. Mark was not in Easter appropriate attire, so he was the photographer.) Mark told Brooks and I to keep smiling.

And we finally let him have his book (Go Dog Go).

One thought on “Daily Moments – Week 13”