One benefit of being brothers is doing everything together.  These two get to play together, eat together, laugh together, and even get ear tubes together.  After the last rounds of antibiotics, the pediatrician said we may be headed for tubes for both children.  Well, we decided to see a specialist and he confirmed that both little guys needed tubes.  They both had mild hearing loss and fluid in their ears, so we signed them up for the next week to get the surgery done.  The week leading up to the procedure I was worried about getting them to the city on time, keeping them content while withholding food and liquids, and putting them under anesthesia for the first time. We were blessed to have all of the above go well. 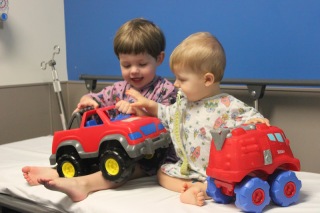 The doctors and nurses were incredible.  They made us feel comfortable and reassured me that I was not overly emotional even though this is a very common procedure.

Our rooms had plenty of toys for the boys and cable t.v. for us.

The boys were playing and having fun, but reality set in when they brought the little gowns, id bracelets, and I saw the chart below with the words “surgery.”

Mark was brave and was with both boys when they put them under.  I anxiously waited in post-op.  I had barely gotten through the first few sentences in my book and the doctor came back to tell me everything went well.  It literally took 5 minutes.  We had to get there 2 hours early for a 5 minute procedure.  At least the boys were entertained the whole time.  That afternoon, it was like nothing happened.  It was pretty amazing.
Both boys are currently struggling through a cold, but at least I don’t have to worry about putting them on antibiotics to clear up their ears.  I was hoping they would start sleeping better, but there is no sign of that so far.
These pictures were taken earlier in the week.  Like I said above, they do everything together. 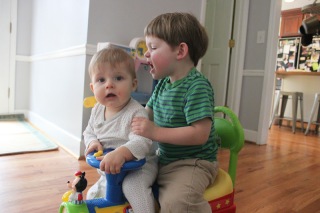 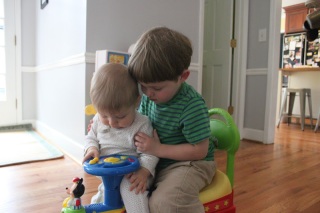 One thought on “Brothers Do Everything Together”