This is the first part of a three series post. We are currently spending 3 weeks in Illinois with friends and family. After being here for 2 weeks I have over 300 pictures so I thought I would start the blogging before it gets too overwhelming.
The first few days we were in Pinckneyville at Grandma and Grandpa Dempsays. We then went up to St.Louis to see a friend and her daughter Aurora who is Brooks’ age.

It was great to see close friends and Brooks of course had fun with someone his size. 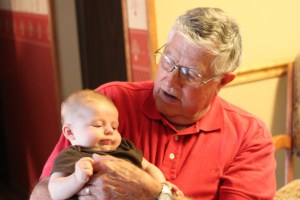 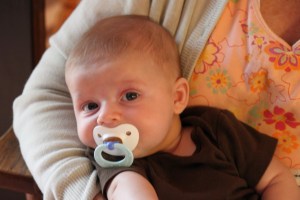 Silas got a lot of lap time with the grandparents and Brooks got some time on the swing. 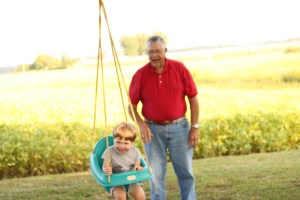 This is Ruby Cat. Brooks followed her around everywhere. Each morning he would come to the door meowing looking for Ruby. It wasn’t until this trip that he said “cat.”

We spent a lot of time outdoors. We had beautiful weather. 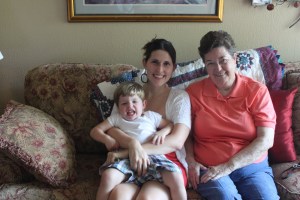 I’ve given up trying to take good pictures with Brooks. 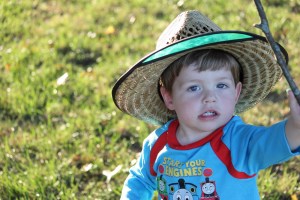 This was the best salmon I’ve ever had. My Aunt and Grandpa pan-fried it in a cast-iron skillet. Yum.

Brooks got to learn about fish on this trip. He went fishing with Papa and Grandpa (I wish I had pictures but I was taking a nap) and he discovered the singing Billy Bass. He wasn’t crazy about it until he figured out how to push the button to make him sing.

After a few days in Pinckneyville, we headed north to Chicago to see family and friends. Our first stop was at the Nelsons. They have Caleb who is 3 weeks younger than Brooks and Addie who is two weeks older than Silas. Not pictured is the Hardys who also have a little one who isn’t too much younger than Brooks. We had a wonderful time visiting with our Illini friends.

While we were in Chicago, we stayed with Grandma Carter and Aunt Jane. Because of Brooks’ love of all things choo-choo we went to the Trolley Museum in Elgin to ride a real trolley.

Here he is blowing the whistle.

He loved all the attention.

One thought on “Illinois: Part 1”