This past week we got a chance to visit Savannah. Its one of the those places that has been on my “to see” list for some time. We ate at some incredible places including, Back in the Day Bakery (not quite as good as Georgetown Cupcakes, but close), The Crab Shack, The Lady and Sons (kind of a disappointment), and Uncle Bubba’s Oyster House. Along with food, Savannah is packed with historical sites and beautiful buildings. We had a wonderful time feasting on seafood and learning a bit about Georgia’s history.

This was a platter for two at the Crab Shack – it included mussels, two kinds of crab, crawfish, shrimp, potatoes, sausage, and corn. This plate of seafood could have easily feed 5 people. Mark packed up the leftovers, but we didn’t even get close to finishing. 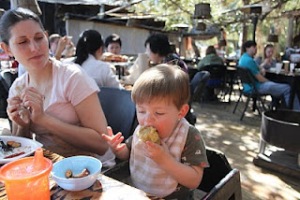 Brooks went crazy over the food. He was picking the meat out of the mussels, stuffing shrimp and crawfish in his mouth, and sucking on the corn. The only thing he wasn’t crazy about was the crab. How does a 17 mth old even know the difference between crab and crawfish? 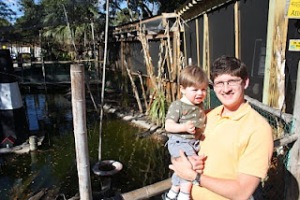 The restaurant made you feel like you were in a tree house overlooking a marsh. It was a fun place, especially for Brooks. In the picture above, Mark and Brooks were looking at the baby alligators in front of the restaurant. 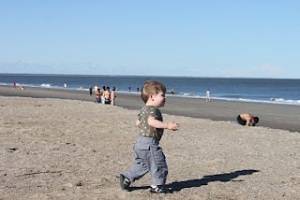 After lunch, we headed to the beach (there were actually people swimming). He had been in the car at this point for about 4 hours and he needed to work out some energy.

As I mentioned above, we got to see some historical sites during our stay. Above is a fountain at Forsyth Park . . . 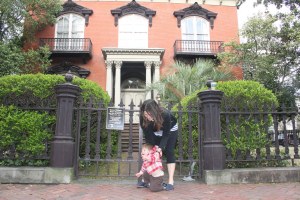 and this is the Mercer-Williams House (the book Midnight in the Garden of Good and Evil was based on this house). As you can see from the picture, Brooks is becoming very difficult to photograph. He won’t hold still so we have a lot of shots of us trying to contain him. Eventually we gave up and realized that it wasn’t going to work.

This is The Cathedral of Saint John the Baptist. It was a beautiful church, but we unfortunately didn’t get a chance to see the inside. 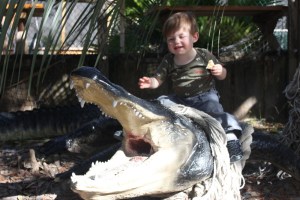 After a day of walking around, Brooks was so excited to see a playground. He is independent enough now where I don’t have to watch him quite as closely which is good because I don’t think I could keep up with him.

One thought on “Savannah”