It was another busy weekend, except this time we were in Pinckneyville, IL (my hometown). It was the 88th annual Mardi Gras for my tiny midwest home. Yes, most would think that Mardi Gras is a celebration in New Orleans, but we celebrate during the Halloween season – and have been doing so for a long time. This festival is the highlight of the year for many P’villians (?). It has a concert, a masquerade ball, a kiddie parade (all the kids from area schools dress in their Halloween costumes and walk in the parade – I was in this parade for many years), a street festival, and a big parade to end the celebration on Saturday night. This festival has left me with some wonderful memories. I was very excited for Brooks and Mark to experience their first Mardi Gras.

with Grandma Clark at the kiddie parade

we met up with old friends and new ones 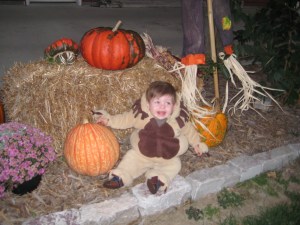 In case you’re confused with Brooks’ costume, he was a lion. I bought his costume in September and he outgrew it so we weren’t able to put on the hood. 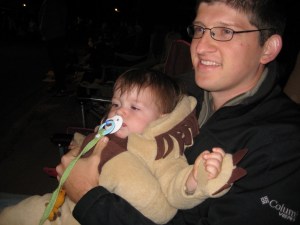 watching the parade with Dad

Mark caught a monster largemouth bass. It was almost as long as Brooks. 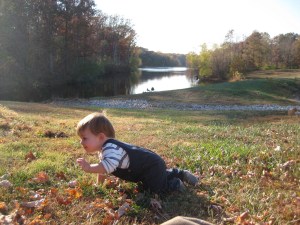 and stayed busy the whole weekend.

His first ride with Grandpa Dempsay on the Ranger. You can actually legally drive one of these around Pinckneyville streets. 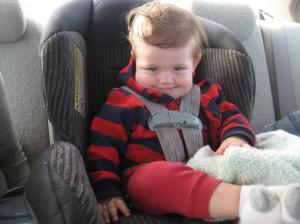 On the way to the airport Brooks was a bit of a stinker. This is his new camera pose. 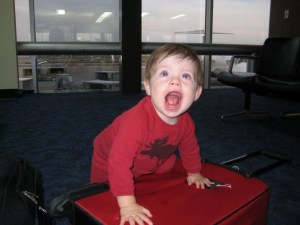 Luckily no one was at the airport in St.Louis so Brooks crawled around on luggage and played with his books.

Because of this he was ready to take a long nap on the plane.