Last week we drove 1 1/2 north to the mountains of Georgia. It was more beautiful than I expected. Brooks and I had alot of fun while Mark sat in meetings and lectures most of the day.

On the first night we went to one of our favorite restaurants, “Chick-Fil-A.” Not only do they have one of the best chicken sandwiches I’ve ever had, but they also have great customer service. On the night we were there the restaurant was hosting Daddy Daughter Night. Dads walked in with their little girls, sat down at tables draped in pink table clothes, and then someone would come and take their orders at the table. After dinner, they took a picture and gave the kids a balloon. It was so precious to watch them. Brooks got a balloon too which entertained him on the ride back. 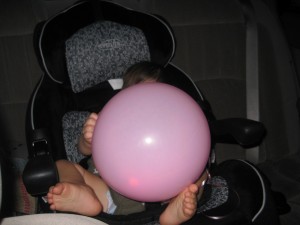 Who knew Georgia had such beautiful hills and mountains?

These are my attempts to capture a picture with both of us and the landscape. 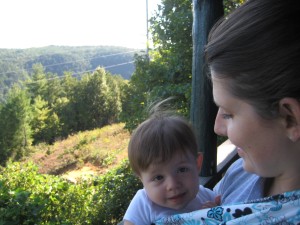 There was a fantastic little store that overlooked the Gorge that had been there since the 1930s. It had little trinkets, souvenirs, food, and some interesting artwork. 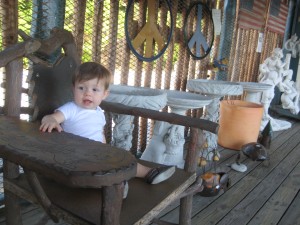 On our trip, Brooks discovered he liked fried okra. 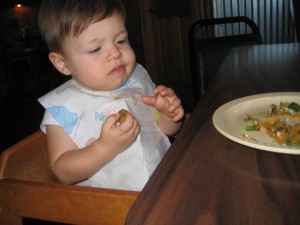 The coolest part of the trip was the Currahee Military Museum. The below picture is of a stable (its original location was in Aldbourne, England but has been moved to the museum in Toccoa, GA) that housed the men of Easy Company (commonly known as “The Band of Brothers”) before they dropped into France during WWII. The town of Toccoa was the home of Camp Toccoa were they were trained before they were sent off to England. It was an amazing experience to see the pictures, uniforms, and read their stories. I think I had goosebumps the entire time.

And to end off the week, Brooks cut his finger on my iPod and received his first band-aid. He was very proud and fascinated by the little bandage on his finger.